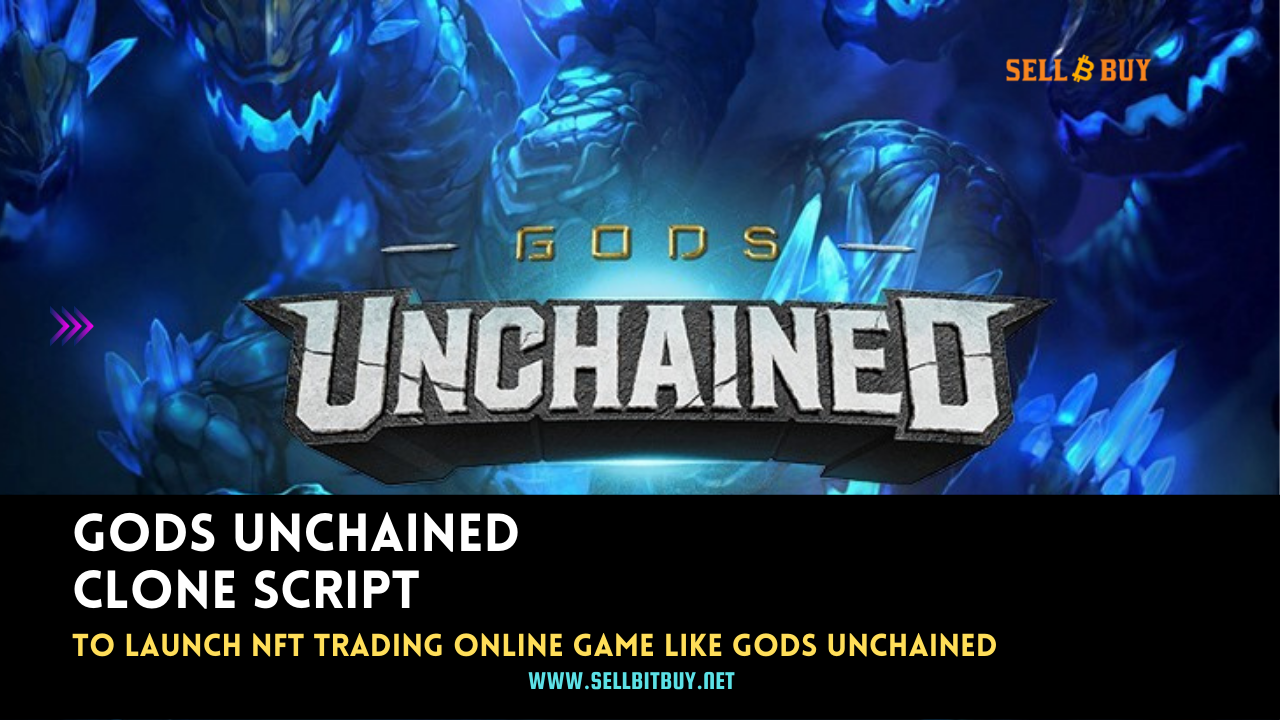 Gods Unchained Clone Script - It is a ready to launch NFT Gaming Platform Clone Script, it can be deployed on Ethereum blockchain, to create a NFT Trading Cards gaming Platform Like GodsUnchained. Where, the trading cards would be NFTs and their value can be based on a native token of the GODS UNCHAINED CLONE.
The Created Gods unchained game clone provides the end user with unique assets to own and manage. The card trader or user  can add their cards particular playing deck which they choose and the token can be traded on the marketplace. The game has a PVP system with your unique assets as the playing portions.
Sellbitbuy, The leading NFT Development Company, supports you to create and launch NFT based trading card game like gods unchained on the ethereum blockchain network, with enhanced features.

The majority of crypto businesses such as gods Unchained are willing to invest in blockchain-powered NFT games.
Gods unchained, a popular and on-demand decentralized game has developed a major shift in the blockchain gaming business. It is designed to earn coins and tokens using the most up-to-date blockchain networks.
In these decentralized trading games, smart contract integration is crucial. Transparency is the most prominent feature because it records all transactions and trades, hence, the benefits will encourage players or gamers to spend more time.
You can make your game rules and restrictions. Gods unchained game clone script and decentralized trading game clone script have many facilities for the players or gamers.

What Is Gods Unchained (GODS)?

An Australian blockchain gaming firm has created gods unchained. It is an ethereum based collectible digital card game with a turn-based system. Each match consists of single combat between two players or a single player and the computer. The goal is to defeat the opponents’ gods and reduce their life to zero.
To brawl their opponent, each player selects a deck of thirty cards from their god collection. When players play the game, they earn digital cards. Two identical cards can be forged into one blockchain-based card if a player has two of them. These cards can be traded, sold, lent, or borrowed by players.
Each collectible card is an NFT token based on the ethereum blockchain. This allows players to own their in-game assets in the similar way they own crypto assets. In 2018, the game was first made playable within a closed data period. The game’s popularity surged in the months that followed. Gods unchained had already made roughly $4 million in revenue through the sale of four million collector cards by the time it released its beta to the public in July 2019.

Gods token is the currency used in the blockchain-based online trading card game. The token will serve as a governance token, allowing players to influence the game's evolution.
Players can also utilize tokens to produce rare cards at the forge via NFT crafting. Most significantly, Gods token will be a vital aspect of the game’s play-to-learn philosophy offering players additional incentives and earning opportunities.

Gods unchained works similarly to other online strategy games, with its own currency like /credits or gold. These currencies take users’ real money and transform it for a more pleasant in-game experience. This currency in Gods unchained is real money. Players can use the game’s marketplace to acquire and sell cards to construct a card that will win additional matches and gain more cards as they do so.
The popularity of these games has been growing drastically with more players and sales every month. With ranked events and tournaments, they have done an outstanding job of promoting the game and community. They also plan to produce a smartphone version of the game which allows them to reach a wider audience around the world.

How Does Gods Unchained make money?

Your triumphs will award you card packs as you play the game. You can either sell the sealed packs or the specific cards by opening the card packs and selling them separately. For example, Opensea is a participant in the NFT marketplace.
Card packs have some categories as follows such as,
The names of the packs are depending on the contents. There will be at least one rare card in a rare pack, one legendary card in the legendary pack, and so on. It is worth noting that these are merely minimums; even a rare pack could include a legendary card.
The higher the card pack’s class, the more money it will bring in. There are five cards in each pack. You might even open a pack and sell the individual cards inside. If you locate a particularly valuable card after opening a pack, it will be more profitable than selling the closed pack.
If you have many copies of the same card, you can integrate them at predetermined rates to upgrade and increase their value.
There are two methods for earning card packs such as,

How Much Money You Can Make In Gods Unchained?

The granted cards exist as NFTs now that the GU has been linked into the Ethereum network. This implies you own cards since they are stored in your ethereum wallet rather than on the game’s servers, allowing you to sell them whenever you choose.
If you only concentrate on leveling up, the award for every 25 levels your earnings is more than $50. You might find extremely valuable cards inside the card packs if you open them. Cards in the top tier can be for as much as $450! Except a minimum of $50 for 25 levels, with a decent chance of much more if you are lucky.
When you add in the tournament prizes, you may expect to make anything from $35 to $200 per week. If you obtain 25 levels every two weeks, you will receive $50 in prizes, and if you participate in the weekend tournaments each week. Then this is a rough estimate of your expected earnings. There are other alternatives that can help you earn money.
When you start playing, you will be given common core cards that are not blockchain tokenized. However, you can profit flux when you win games in Ranked mode. If you have numerous copies of the core cards, you can use flux to integrate them to create a more valued card.
How can you exactly do this? Simply go to ‘forge’ and pay flux to combine cards after you have enough basic cards. For example, you can make a meteorite card by combining two similar plain cards. Similarly, if 5 meteorite cards are combined, a shadow form of the card is created when you connect 5 shadow cards, you will receive a golden card, and so on.
However, this still does not illuminate how to make money. To earn, simply swap Gods unchained NFT trading games for fiat currency on the ImmutableX marketplace.
In furthermore, the game organizes a weekend tournament every week where you can win prizes. You must level up your account to gain more rewards, which is determined by the number of encounters you win.
Gods unchained has announced the creation of $GODS, their official governance token. Players can use the token to make NFTs, buy card packs, and gain more rewards once it is released.$GODS is an ERC20 currency that gives participants staking incentives and voting power. This means players can influence the significant game developments and thus the future of the game
Gods unchained NFT game is planning to launch 500 million tokens later in the year. However, these tokens will not be released at the same time. Instead, the token will be by the programmers.

The Future Of Gods Unchained Game

Gods unchained has been a great hit since its release in 2018. With a new Play-to-earn strategy. It changes the industry by allowing players to earn money in a virtual economy. Millions of people flock to games like League of Legends and world of craft which command large sums of money.
Gods unchained aspires to challenge the established effects and guarantee the long-term viability of the play to earn paradigm. If large gaming studios like riot and Bizzard begin to include in-game coins, crypto, and blockchain as a whole may be pushed farther into popular usage.
Gods token will be released shortly in Gods Unchained , and it will be intriguing to see how crypto and NFT marketplaces will be integrated into future games. Because of its growing popularity and well-attended events, the game will be on the minds of many players.

How Sellbitbuy Can Help You From “A to Z “ To Create a Blockchain Game Like GodsUnchained?

Sellbitbuy, a leading Cryptocurrency exchange development company offers best solutions for NFT game development platform services that can help you launch your own online game from planning, designing, to development and deployment. On the Ethereum network, we deliver a bug-free NFT trading game similar to Gods Unchained.  We have a transparent work nature, and which results in bug-free outputs. Our deep understanding on blockchain technology and blockchain games can help you to make your GODS UNCHAINED CLONE to stand out from the competition.