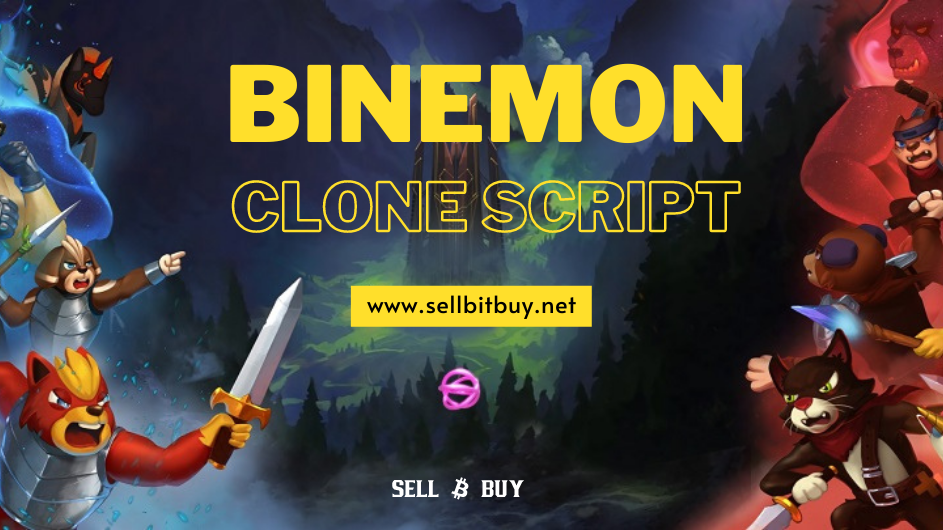 Binemon Clone Script is a virtual pet NFT gaming platform associated with elements of an ideal RPG game. Our Binemon Clone Script allows players to fully enjoy the game by providing them with awards that can be swapped for money and allows them to possess in-game items like trading eggs, ambrosia (fusion), characters, items, land. Binemon Clone Script is a play-to-earn game that generates cash all across the world since anyone can join and participate without needing any special software.

Binemon Clone Development aspires to reimagine the concept of play-to-earn by integrating gaming with revenue creation. Spreading income among players will boost player retention and, in turn, platform growth.

Binemon Clone is developed in the way that the players can travel to five distinct continents throughout the game. A comprehensive PvE system is integrated with a diverse PvP system, which includes a campaign, global bosses, and the Ancient Tower. In duels, the arena, tournaments, guild wars, and the battlefield, players can compete against one another. Players receive rewards in all modes, which they can use to fuse monsters or sell on the market.

Binemon's uniqueness is revealed in the way the creatures are made. When it comes to designing exclusive monsters, rarity and specific qualities are essential. To increase the "pool" of available qualities, each Binemon has ten different body parts. Players can earn rare body parts and stat benefits even if a new hatch is discovered or a fusion occurs. The rarest and most powerful Binemon can help players advance faster in both PvE and PvP modes, as well as fetch a greater price on the market.

Binemon's PvP component is quite extensive. Some of the features, though, are still in the works. Guild wars and tournaments are designed to pit competitive players against one another. Every PvP combat gives you DRK tokens and Ambrosia, which you may exchange for epic equipment. The amazing items will assist gamers in leveling up their characters and improving their overall strength. Guild battles allow gamers to conquer lands by working together as a team. Guilds also have Castles, which can grow and expand in order to recruit top-tier Binemon players.

Binemon is a game that combines a virtual pet NFT game with an idle RPG. Users can battle in PVE and PVP modes for bitcoin awards in addition to gathering and exchanging eggs, ambrosia (fusion), equipment, land, characters, and players.

The Idle RPG game genre, which includes titles like Lost Centuria, Adventure, and Idle Heroes, is sweeping the gaming world. They are, however, merely for the purpose of amusement for the players. The NFT mix has enabled players to own, exchange, and trade in-game objects, which was previously unavailable in traditional games.

Binemon's Highlights And Its Growth

On its first day, the website sold around 150,000 NFT in Binemon, allowing collectors to obtain characters like "Mons." Binemon is the first NFT Game to release software for both iOS and Android, something that no other NFT Game has done before. The gods Prometheus, Babel, Ares,  Hestia, Hercules, Artemis, Athena, Hades, Hephaestus, and Hermes, according to Binemon's official website, have a 10-phase creation process.

Binemon has two amazing PvP and PvE features that let users compete for prizes and benefits against one another. This indicates that Binemon is well-known among a huge number of people all across the world.

Binemon has established its capacity to compete with traditional gaming platforms by achieving exceptional commercial success. As seen by the increase in global audiences, gamers obviously immerse themselves in the Binemon digital realm. This tempts the entrepreneurs to start an NFT gaming platform like Binemon. For those entrepreneurs, being the leading NFT development company Sellbitbuy provides Binemon Clone script to compete with the demand and Digital gaming realm. Clone script like Binemon makes you play-to-earn trends at peak.

The emergence of blockchain and NFT technologies has been the largest trendsetter in this 21st century. As a popular NFT Gaming Platform Development Company, we have reached out to every corner of the globe. Taking advantage of this popularity and coming up with smart solutions, many entrepreneurs are ready to invest with us. Our Binemon Clone Script will undoubtedly increase your business. Sellbitbuy can help you get your NFT gaming platform development ideas off the ground. So, hurry ahead and launch your NFT gaming platform like Binemon, as soon as possible.